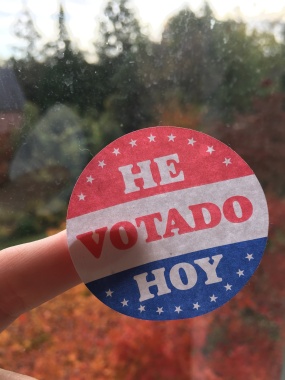 That question was the most compelling and gut-wrenching question I heard asked in hallways and classrooms the morning after the election.

I’ve been an educator for over 25 years. That means I’ve been one of the adults in school buildings the day after the last six elections. There is always dialogue about democracy, respecting the will of the people, unifying the country, etc.After every election, some students and educators are happy with the results, and some are not.

Yet as we’ve all come to agree on by now, this time is radically different. There are so many stories and posts and articles on this difference, that adding my perspective to the chorus felt ridiculous.

I’ve read about hate incidents, about protests and platforms, safety pins and classroom notes, and everything in between. But I haven’t read much about one simple question and how very differently it was asked this time around.

Walking through the hallway of a K-8 urban charter school the morning after, I heard that question asked of so many teachers as they greeted shaken students in the hallways, and my student teachers noticed it as well. They noted that the question was asked, not with a child’s fleeting curiosity (as I’ve heard after previous elections), but with a genuine sense of urgency and concern.

As one of my student teachers pointed out, this question felt like a litmus test. Students weren’t just curious. Ten weeks into the school year and the day after the election of Donald Trump, they were suddenly cautious and guarded around her. In a school with 75% students of color, this white student-teacher felt as though they were trying to assess not just where she stood politically, but if they could trust her.

Am I safe with you?

After all of the scary messages of the campaign, about policing, deporting, sexually assaulting, mocking, demeaning, and disrespecting, the students didn’t just want to know who teachers had voted for, they wanted to know if their teachers can be trusted. They want to be assured that the person at the front of the room isn’t secretly supporting rhetoric and policies targeting them. They want to know that they’re truly valued for who they are. Worth fighting for. And most of all, safe.

There are reasons both for and against sharing our voting decisions with students, but in the wake of this election, it’s critical to understand that this question has layered meanings that reach far beyond curiosity.

How will you answer?